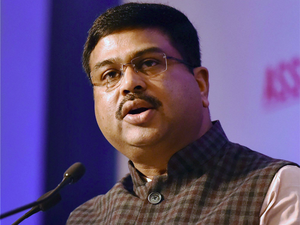 INDORE: Union minister Dharmendra Pradhan today came out in defence of the Goods and Services Tax (GST) and demonetisation, saying new shoes bite for the first few days, but become comfortable to wear thereafter.
He also dismissed reports that the noteban and implementation of GST have reduced jobs and said a wrong impression was being created about the NDA government over the two issues.

“Unnecessarily an atmosphere is being created that demonetisation and the GST had curtailed job opportunities,” he told reporters on the sidelines of a function at Dudhia village near here.

Replying to a query over the reported adverse impact of the GST and demonetisation on jobs, the Skill Development and Entrepreneurship Minister said, “When you buy some new shoes they bite for the initial three days, but on the fourth day they fit perfectly.”

To Congress vice president Rahul Gandhi’s description of the GST as “Gabbar Singh Tax”, Pradhan said it was his “incivility”.

“He (Rahul) has the habit of using such words. May God give him wisdom … In the 2014 general elections, people made him bite the dust. Therefore, I can understand his mental condition,” the minister added.
“He (Rahul) is concerned about his future. I wish him good luck,” Pradhan said.

In a scathing attack on the BJP-led Union government over the GST, Rahul Gandhi, while addressing a rally in Gujarat yesterday, described it as the “Gabbar Singh Tax” and called for changes in the new tax regime to make it simple. HWP LAL MAS NP GVS