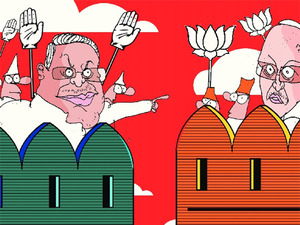 NEW DELHI: The BJP is prepared for the upcoming Gujarat election to be a referendum on the GST, if the Congress wishes so, and is confident that the result will be the same as Uttar Pradesh where the opposition had made the state election a referendum on demonetisation.
ET spoke to some senior BJP leaders for this report. “Let Congress make the Gujarat election all about the GST…it will fall flat on their face like their diatribe against demonetisation in UP,” a senior BJP leader told ET. He explained that while demonetisation did cause initial hardship to people in UP in November and December last year, the inconvenience had dissipated by February and March when votes were cast. “Similar is the case with GST. The initial troubles with GST implementation have been faced by traders in Gujarat but we are sure that by the time the votes will be cast in the second week of December, the troubles over GST would be far less. The government has already taken a host of steps towards the same like the shift from monthly returns to quarterly returns for a class of traders and reducing some rates,” the leader told ET. Another BJP leader, however, told ET that Congress knows very well that it will not win Gujarat and is only working with an aim to “bring BJP below 100 seats” to show it was a narrow win for BJP to embarrass the top BJP leadership.
“They see it as a scenario to launch their 2019 election campaign along with elevation of Rahul. But it is not going to happen,” the BJP leader added. BJP has 117 seats in the 182-member state assembly and has set an aim to win 150 seats.
There is some concern in the party over the GST impact in areas like Surat and Ahmedabad which have a significant number of seats but the party sees it as temporary. To specifically address this, the party has been reaching out to small and medium businesses in a bigger way and making them understand what GST is all about. “There is a lot of confusion among traders regarding what will be the actual rate of tax, how much will be the difference from the previous tax slabs. We will help the traders with facts and figures, same as we did after demonetization.

Gujarat was the first to set up maximum digital payment centres which made it easy for people,” another BJP leader said. He added that feedback from traders is being collected from traders, especially in places such as Surat and Ahmedabad and assurances are being sent out that the problems will be solved once transition period is over.
Besides projects such as the Narmada project, electrification and improving supply of drinking water, BJP leaders said they will focus on development centric projects, including inauguration of passenger service from Ghogha to Dahej, pay revision for fixed salaried workers, GST waiver on micro-irrigation equipment and interest-free agriculture loan of up to Rs 3 lakh to farmers.