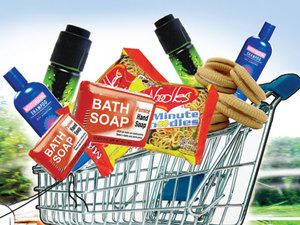 Daily-use products including soap, tooth paste, instant noodles and edible oil, among others could see a 2-5% increase in demand over the next 12 months, according to a report by global research and analytics firm Euromonitor, as lower levies on these items under GST is seen fuelling consumption and helping brands widen their product portfolio.
On the other hand, the report, which was shared with ET, says people will be less willing to spend on biscuits and personal care products like shampoos as they now attract higher tax under goods and services tax (GST).

“Over the long run, implementation of the GST would benefit the organised players, from a simpler taxation system and uniform tax rates across the country, and would help achieve higher efficiencies in the supply chain,” said Euromonitor International senior research analyst Shreyansh Kocheri. “Increasing penetration of the organised retail sector due to GST would also help players counter threat from the vast unorganised market in the country.”

In the packaged foods segment, consumption of noodles is expected to increase to 25.3% from 23.8% with GST rates being rationalised, the Euromonitor report states.

Gautam Sharma, managing director of instant noodles maker Indo Nissin said, “Savings on account of taxation are being reinvested for category expansion, with spends on promotions and advertising increasing. However, consumer prices have not changed because the decrease in taxes has been marginal.”

Another large, staples category where volume growth is forecast to increase is edible oils—from pre-GST levels of 14.6% to 15.6% growth in 2018, on account of decrease in tax rates. However, large industry players expressed caution about category growth.

“We expect business as usual for the category. Increase in consumption will largely be on account of a consumer shift from the unorganised to organised segment, and secular growth,” said Siraj Chaudhry, chairman of Cargill India, maker of NatureFresh and Sweekar edible oils.

He said as far as consumer prices are concerned, the category is impacted directly by global market prices and currency fluctuation.

According to the report, in the dairy category, there will be a decrease in volume growth of butter, moving down from the pre-GST level of 5.7% to 5.1%.

Similarly, volume growth in cheese is expected to drop from the pre-GST level of 11.3% to 9.8%. Milk powder volume consumption could pick up marginally from 1.2% in the pre-GST period to 1.4% growth in 2018, the report says.

Volume growth in the biscuits segment, one of the largest categories in packaged foods, however, is forecast to decline from pre-GST 0.9% growth to 0.1% on account of the substantial change in tax.

Euromonitor’s report says most large segments in the personal care products category are expected to grow. Oral care products such as tooth pastes—classified as necessity products under GST—will see a step up in consumption by an additional 1.6 million litres in 2018, it says.

Consumer goods giant Hindustan UnileverBSE -1.10 %, which reported growth across segments on Wednesday in its quarterly earnings, said the home care (which includes detergents) segment showed revenue growth of of 13% while revenue from personal care items (including soaps and skincare products) went up by 8%.

“I believe by the end of December, there should be a near-normalcy and there would be some element of channel reset because modern trade is growing much faster,” chief executive officer Sanjiv Mehta, had told reporters after the results announcement.

Deodorants and shampoos, on the other hand, will see volume growth dropping on account of increase in tax rates. Standard shampoos, too, for example, will see a decline in volume growth, from pre-GST 1.9% to 1%.

“Pricier alternatives to necessity products and discretionary products such as body washes, shower gels, moisturisers, deodorants and colourants, which are generally consumed by urban consumers have higher price sensitivity, will be impacted by even marginal price hikes due to higher taxes under GST,” the report says.

According to the report, GST will create a unified national market of 1.3 billion consumers, and in cases of price increase due to GST, mass consumers are most likely to downgrade or switch to substitute products, including unpackaged items.