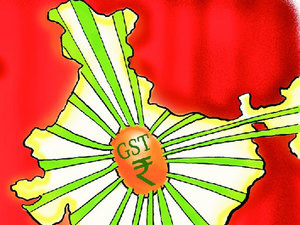 NEW DELHI: Amid the build-up to the Gujarat elections, the Congress has decided at a meeting to up the ante against the “faulty implementation by the Modi government” of the goods and services tax. This comes at a time when where traders and small and medium enterprises are reportedly upset about the GST fallout.

Congress finance ministers will, at the upcoming GST Council meet at Guwahati, demand structural and architectural changes in GST, including rationalisation of tax slabs and concessions to sectors such as textile and diamonds “as the present form makes GST-compliance impossible”.

Manmohan Singh and P Chidambaram have briefed AICC office-bearers on the flipside of the current GST implementation.
After presiding over the meeting, Rahul Gandhi said, “Today we had two meetings, one on demonetisation and the other on GST. At the demonetisation meeting, we discussed how the country has suffered and many small businesses have closed. At the GST meeting, it was discussed how a good idea was destroyed… The Prime Minister gave two shocks to the country, one after another”. AICC chief spokesperson Randeep Surjewala said, “The faulty implementation of the flawed GST has crippled micro and small businesses, stunted the economy and has led to insurmountable job losses. GST compliance in its present form has become impossible for shopkeepers, traders and businesses, wiping out their life’s earnings. Inherent flaws vis-a-vis excessive of goods of mass consumption have played havoc with the budget of ordinary housewives and common man.”
Punjab’s FM Manpreet Badal said, his Congress counterparts and he will demand the GST Council to address the issue of lack of clarity as consumers are being slapped with higher GST almost on all goods. They want the government to provide concessions to the textile and diamond sectors.
“Congress FMs will espouse –– both inside and outside the GST Council –– the pain and suffering of MSMEs, shopkeepers, traders, housewives and the common man. Congress will not rest until a resolution of these issues is done by the BJP government”.