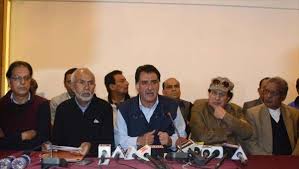 Demanding withdrawal of presidential order through which Goods and Service Tax Act was extended to the state, Jammu and Kashmir Coordination Committee (JKCC) – an amalgam of trade bodies Wednesday alleged that Finance Minister Haseeb Drabu and PDP member of Parliament Muzaffar Hussain Beigh “played a pivotal role in eroding state’s fiscal autonomy by misleading people”.
JKCC reiterated its demand of withdrawal of the Presidential order by virtue of which GST was extended to J&K, roll back of GST in present form and declaration of J&K as free economic zone.

Addressing a press conference here, co-convener of JKCC, Mubeen Shah said, “State government through Haseeb Drabu and Muzaffar Hussain Beigh took the traders for a ride and surrendered everything on the fiscal autonomy front and sovereignty of the state.”
“We understand that both of them need to be accountable and therefore they have no right to stay at their respective positions. Whole system seems to be rotten and in this system there is no door which one can knock upon.”
“If the finance minister and the MP would have realized their follies and the difference between what they preach and what they practice – they would have resigned on moral grounds by this time, but obviously and unfortunately they cannot see the difference. Irony is that the minster keeps on hoodwinking the traders by one confusing statement or the other or by so called schemes.”

“Haseeb Drabu at the time of opposition used to preach about the ill-effects of GST on state and now as a finance minister he has supported it and done total opposite of what he used to write and preach earlier,” Shah said.
“Drabu had assured the State Assembly that all necessary safeguards to State Constitution have been ensured while introducing the GST. The taxation rights of Jammu and Kashmir – unlike any other state – are enshrined in the State Constitution and not in the seventh schedule of the Constitution of India. What that meant, only Drabu would know,” he adds.
“The erosion of J&K’s Special Status and its fiscal autonomy by implementation of the GST has even been acknowledged by the Indian National Congress Party which stated that the law would infringe upon the Special Status of J&K.”
Convener, JKCC, Siraj Ahmad said likewise that chairman consultative committee, Muzzafar H Beigh, appointed for suggesting safeguards to the State Constitution and its special position. Beigh while appreciating the apprehensions put forth by the trade bodies assured them of accommodating their concerns and suggestions in safeguarding the state’s special position.
“At all these government levels, the trade organizations/ associations were promised of rolling out a State GST tax law that without eroding our special position and without compromising the sovereignty of J&K.” he said
“Apart from this, we were assured that the draft of such a proposed GST law would be shared with us for our comments and suggestions before its presentation in the Legislative Assembly. However, to our utter dismay, this promise was not kept and instead a resolution was directly presented before the Legislative Assembly on July 3.”
“Members in the Assembly made some artificial and cosmetic discussions over it. These as we knew meant nothing in the end. The so called mainstream parties collaborated with each other – which they always do – and got it passed. Some were present in the house and some were absent from the house but in the end, we dare say, that those present supported it with their presence and those absent were also in support of it with their absence. It was sort of a fixed match or shall we say a fixed assembly session,” he added.