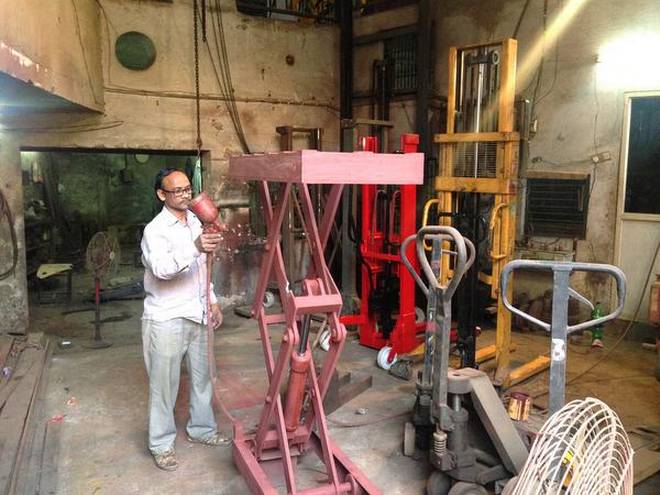 When demonetisation was announced on November 8 last year, the concrete façade elements unit of Manmohan Gaind, the vice-president of the Manesar Industries’ Welfare Association (MIWA), at Industrial Model Township (IMT) in Manesar here had an annual sale of around ₹15 crore and 10%-12% growth per year.

Over the past one year, the business has recorded a 20% drop in sales. The 20% decrease in sales compared to 10% growth per year effectively means a dip in growth by 30%, said Mr. Gaind, emphasising how demonetisation had affected the industry, primarily the Micro, Small and Medium Enterprises (MSMEs).

“While the first couple of months following demonetisation led to disruptions, the non-availability of cash eventually led to decrease in demand, hitting MSMEs the most. Since all the cash was deposited in banks and restrictions were imposed on withdrawal and payment methods, the economy, which was largely cash-driven, was hit badly,” he added.

The decrease in demand led to lay-offs and around 6,000 workers in IMT Manesar, housing about 1,200 units, alone are feared to have lost their jobs, he said.

“Demonetisation has been very disruptive, especially for MSMEs, and constant job creation has not happened. Things would have returned to normal earlier but then the Goods and Services Tax (GST) came in. It has been a double whammy for the industry,” said Mr. Gaind.

However, he added that demonetisation will help the economy become more formal and stable in the long run.

“If more tax compliance happens, the rate of tax will come down benefiting all. In the short term though, people have suffered,” said Mr. Gaind, who represents a host of industries, including the automobile sector.

He said the MSMEs, which create most jobs, need immediate attention from the Centre and the Haryana government in terms of bank loans at cheaper rates, decrease in power tariffs, out-of-court settlement of long-pending legal tussles and promotion of better technology.

NCR Chamber of Commerce and Industry president H.P. Yadav, who represents around 200 MSMEs in Delhi and neighbouring areas, said the ‘floating working population’ in real estate was affected the most during note ban.

“A significant share of the working population in real estate comprises migrants from Uttar Pradesh, Bihar and West Bengal, who typically work for a few months before returning to their village. They prefer to be paid in cash. Since payments through bank accounts were made mandatory for workers after demonetisation, these people returned to their village,” said Mr. Yadav.

He added that he did not see any “positives” in demonetisation since it had failed to weed out black money, “but MSMEs continue to suffer on account of cash crunch due to note ban and GST”.

Mr. Yadav said MSMEs in NCR had witnessed a 20%-30% job loss over the past two years.

He lamented that even banks were not supporting the cash-starved small industries since demonetisation and loans were not readily available. “Fearing that small industries might fail to repay loans, banks are not offering loans easily. The interest rates are also very high,” he added.

Disputing the claims of the Haryana government that several lakh jobs had been created over the past three years, Mr. Yadav sought to know how jobs were created when not even 10% of the total investment promised at ‘Happening Haryana’ summit last year had materialised.

All-India Trade Union Congress (Gurugram) general secretary Anil Pawar claimed that almost all companies in the automobile belt, extending from Gurugram to Bhiwadi, had laid off workers during demonetisation and the number of jobs lost was very high.

Animesh Saxena, the president of the Udyog Vihar Industrial Association, said demonetisation caused a lot of disruptions in the apparel industry in NCR, with around 7,000 units, but did not see any job loss.

“It was peak business season for the apparel industry in NCR, mostly involved in exports, and lay-offs would have impacted the business adversely. So industrialists went the extra mile and arranged for groceries and rentals for their workers. There was no job loss. The impact was more on small fabric producing units in south India, leading to shut downs and job loss,” said Mr. Saxena.

He, however, said the GST had far bigger impact on the apparel industry in NCR than demonetisation.