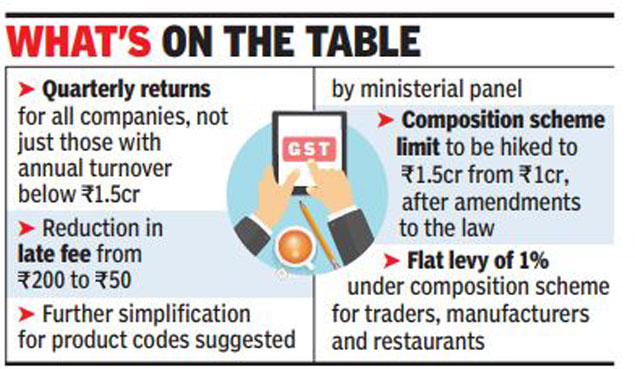 NEW DELHI: In a comprehensive overhaul of the four-month-old goods and services tax (GST), the Centre and states are reviewing nearly half of items in the top bracket of 28% and allowing even larger firms to file returns once a quarter instead of every month.
A senior official told TOI that the fitment committee, which decides on product-specific rates, is looking at proposals to pare the rates on 150-200 items with a majority of them being from the top bracket. The list includes several daily use products as well as sanitary and electrical fittings, construction material, furniture and goods are manufactured by the small scale sector.
As reported by TOI on October 9, several states have petitioned+ for a reduction, which has prompted the review and a final call is expected at Friday’s GST Council meeting in Guwahati. For the Centre, the main concern is finances as it has committed to compensate the states for revenue, while ensuring that it sticks to the fiscal consolidation plan.
A smaller list of goods and services, many of which will face an 18% levy, will signal the Centre’s resolve to move to a three-tier rate structure.
Finance minister Arun Jaitley has already indicated his backing for single standard rate, which is currently split into 12% and 18%.

“A large number of items which were not part of any schedule faced 14% tax and all these have moved into the top bracket. The idea is to limit the 28% levy to sin and luxury goods,” said a source, who did not wish to be identified. The review comes amid a perception that the government has raised the levy on several goods and services and growing instances of evasion, where shopkeepers are insisting that the payment be made by cash instead of through electronic means.
To tackle this concern, a panel of five state finance ministers has suggested doing away with the detailed tax break-up in the bills issued to consumers and instead revert to the earlier system of saying that the price is inclusive of all taxes. Ministers, especially from states ruled by BJP, believe that the split between central and state GST in the bills has created an impression that tax rates have increased, when on most items it had come down. “The ministers have looked at the practice in other countries, such as Australia, and no one follows this model,” said an officer.
In addition, the ministerial panel has recommended that all companies be allowed to file returns on a quarterly basis to do away with complaints of higher compliance burden. At the last meeting, the GST Council allowed quarterly filing for entities with annual turnover of up to Rs 1.5 crore. “This should be done for units with turnover of Rs 5-10 crore, if not for everyone,” said a source.

The government had argued that 90% of the taxpayers paid less than 5% of the taxes. The panel has also suggested a steep cut in late fee paid by those who miss the deadline from Rs 200 to Rs 50, again a move to address concerns expressed especially by those who do not have a liability but are required to submit returns.
Several proposals are expected to go through as PM Narendra Modi has already indicated that the government is looking at further simplification.
In Video: PM indicates more relief measures at next week’s GST Council meet