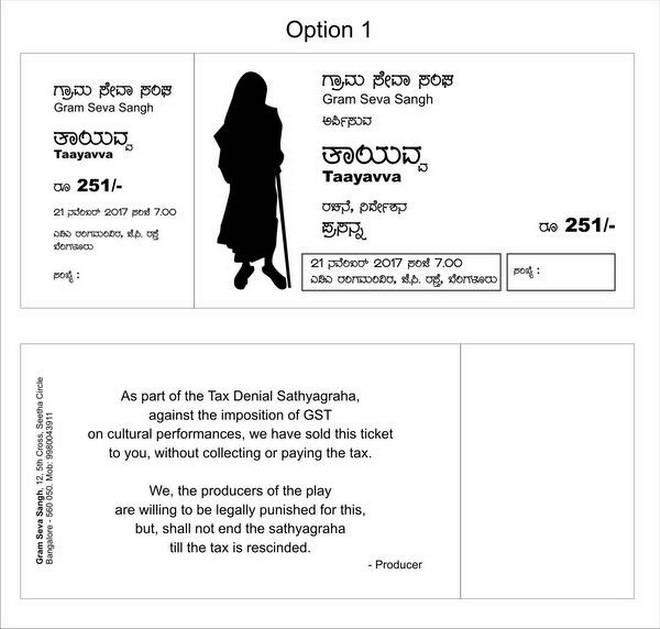 In a one-of-its kind protest against the Goods and Services Tax regime, producers of a Kannada musical are set to defy the tax norm by selling tickets without collecting 18% GST from ticket buyers.

What’s more, they are inviting Prime Minister Narendra Modi and Finance Minister Arun Jaitley to watch the performance scheduled on November 21 and “punish” them for staging the play in defiance of GST norms.

“Taayavva,” a Kannada musical, has been produced by the Gram Seva Sangh, which is spearheading the tax denial satyagraha demanding 0% GST for all handmade products in the country. Incidentally, the sangh, through a committee headed by noted sociologist Ashish Nandy, has already identified over 200 handmade products that need to be brought under 0% GST.

The nearly 100-minute musical has been directed by noted theatre personality Prasanna. It revolves around the predicament of a mother whose son — cobbler and fighting for 0% GST on handmade products — gets killed, leading to the woman becoming a full time activist for the cause of toiling people.

The ticket has been priced at Rs. 251 so that it attracts GST. Producers, on the tickets, have stated that it is their protest against imposing GST on cultural performance for which they are willing to be punished.

“The musical is a metaphor. We want to extend the theme beyond theatre and want people to see culture as a weapon of change,” said Mr. Prasanna, who was on a hunger fast demanding 0% GST for all handmade products recently. “I have written to the Prime Minister and the Finance Minister, inviting them to watch the play,” he said.

In the letter to the Prime Minister, he says: “The mother in the play is suggesting a better solution. She wants you to treat the vast population as a group of entrepreneurs producing handmade products…”