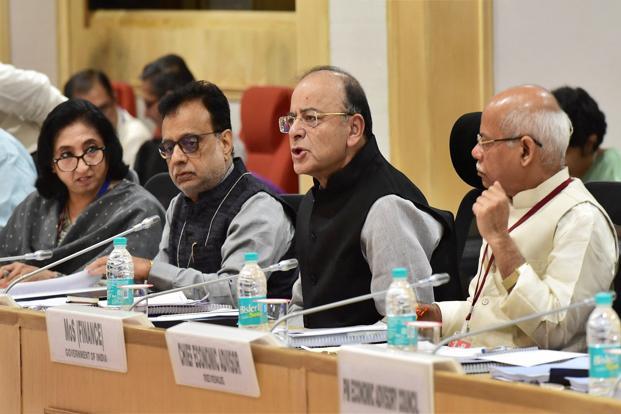 The meeting of the Goods and Services Tax (GST) is now underway and is being chaired by Union Finance minister Arun Jaitley.

The 23rd meeting of the GST Council will be deliberating on the impact on the small scale industry, exemption to small traders and issues related to maximum retail price (MRP).

Here are the live updates:

5.15pm: Congress vice-president Rahul Gandhi says, “We will not allow BJP to impose a Gabbar Singh Tax on India. They cannot break the back of the small and medium businesses, crush the informal sector and destroy millions of jobs.”

4pm: “Panic stricken government has no option but to concede demands for change. Thanks to Gujarat elections, government forced to heed advice of opposition and experts on flaws in implementation of GST,” said former Union minister P Chidambaram.

2.55pm: Luxury goods like washing machines and air conditioners have been retained at 28%.

2.50pm: Paints and cement have been retained in the 28% tax bracket, Sushil Modi said.

2.35pm: GST meeting will be path breaking, many crucial decisions in favour of traders, manufactures and consumers will be taken. Some important decisions already taken like reducing almost 200 goods from 28% to 18% slab: Himanta Biswa Sarma, Assam finance minister.

2.30pm: GST Network on Friday said businesses can now make changes to the forms uploaded on the portal to claim transition credit.

1.45pm: “Tax rates should have been set lower from July 1 itself and I have said that 28% tax rate means you are encouraging black marketing,” Delhi deputy chief minister Manish Sisodia said.

1.20pm: Congress-ruled states have been demanding rationalisation of GST rates to bring down the peak tax rate from the current 28%.