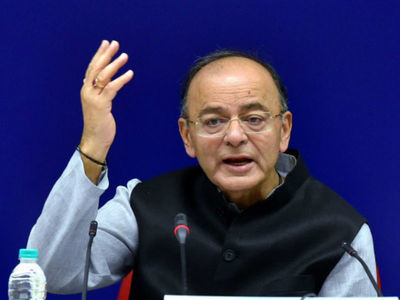 New Delhi: Finance minister Arun Jaitley on Monday signalled more GST rate cuts and appealed to businesses to pass on the benefit of the recent reductions to consumers.

“The tax rate rationalisation process will always continue. Already, you have a situation today where every tax payer can say that he has a bigger market and more reasonable tax rates,” said Jaitley.

The finance minister, however, qualified that the rate cuts will be presaged on revenue collections and then went on to point out that the tax burden on most items at present is less than what it used to be.

In an interaction with the media, Jaitley dismissed political charges that the GST rate rationalisation announced by the GST Council last Friday was designed to influence assembly elections in Gujarat. He defended the four-rate GST structure saying in a country like India, basic food items and luxury and sin goods cannot be taxed at the same rate.

The minister urged the industry to pass on benefit of the tax rate cuts to consumers. “This will also help bring down inflation,” he said.

Jaitley, who chairs the GST Council which also consists of members from states and union territories with legislature, clarified that the relief measures and GST rate cuts that the Council announced at its 23rd meeting in Guwahati last week were part of an ongoing rationalisation exercise based on an approach paper that guides tax rate revisions in the GST era.

The GST Council’s decisions appeared to acquire a political hue as parties sought to link the constitutional body’s policy response to tax payers’ difficulties in the new regime with the ongoing assembly poll in Gujarat, where the main opposition party Congress and the ruling BJP are locked in a fight.

“This is juvenile politics to either link it (Council decisions) to elections or to political demands. Effectively today, almost all items every item in the goods category is better off today than what they were prior to 1 July…The GST Council has been very pragmatic and flexible. We respond to market realities,” said the minister.

Rahul Gandhi said the Congress would continue to fight for an 18% cap on the highest GST slab instead of the current 28%, and vowed that the party would get the job done “if the ruling BJP doesn’t”, Mint reported on Saturday.

“Those who are speaking of a single rate GST, have no understanding of the tariff structure. Tax rate on food items have to be nil, while items used by common man should be at the lowest rate of 5%. Obviously, luxury goods and sin products and items that are hazardous to environment and health cannot be taxed at the same rate,” The minister said food items cannot be taxed at the same rate at which a luxury yacht is taxed.

Responding to the compliance burden of businesses, especially the small and medium enterprises and exporters, the GST Council has allowed continuation of some of the pre-GST era incentive schemes and suspended till end of the current year the rigorous invoice matching of suppliers and buyers and the reverse charge mechanism that makes big businesses responsible for tax filings for items sourced from smaller units.

“Once the system establishes, some of the steps planned in the original design would obviously be nudged back into the system,” Jaitley said.

Experts believe that this has led to a situation where easing the pain of the industry has gained priority over the transparency and widening of tax base which were the original objectives of GST.