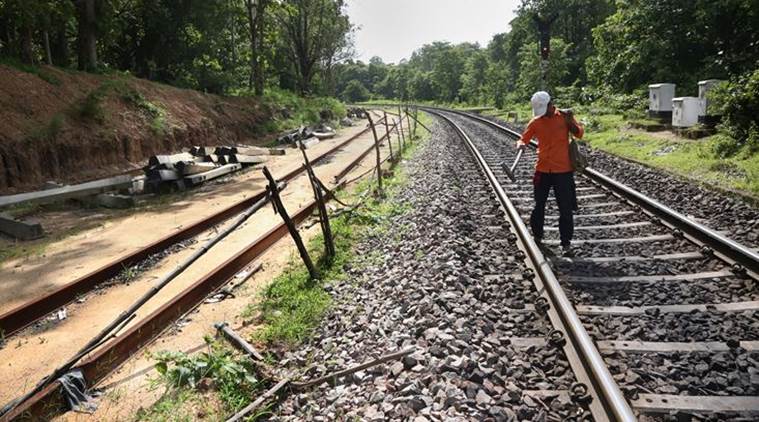 In the first such move by the central government, the Railways has decided to make all its ongoing projects “GST-neutral” by bearing the additional burden under the new tax regime to benefit its contractors, official sources told The Indian Express. The policy decision issued this month by the Railway Board is aimed at contracts awarded to individual contractors before the new tax regime came into being.
The decision comes after contractors working on thousands of projects worth crores conveyed their resentment over the extra burden of GST, which, they said, would escalate costs to unviable levels even after including input credit. Sources said that some contractors, especially those engaged in labour-intensive projects like earth work and laying of tracks, had also sought to cancel their contracts.
”The policy has been issued in the spirit of natural justice. We don’t think GST meant to put extra tax burden on contracts already awarded,” said a senior railway ministry official.
Sources said that if the GST regime results in less tax burden than what was existing earlier in any contract, the transporter would realise that money from contractors. However, officials involved in managing some of these contracts said the financial liability might be significant at the end of this year since in most cases, the Railways will end up shouldering the additional tax burden.
Sources said the move “may have a cascading effect” as other ministries and some state government agencies have made informal inquiries to the Railways about the decision, which could be replicated by other central organisations.
After the notification of the GST on July 1, railway contracts, subject to their nature, attracted a tax bracket as high as 18 per cent. The GST Council subsequently lowered that to 12 per cent.
In certain areas, sources said, work stopped for at least 15 days as contractors moved to resolve this issue. Field units in the zonal railways also received representations from contractors stating that the additional burden was more despite receiving input credits in certain cases.
According to the latest decision, the issue will be dealt with on a case-to-case basis.
Under the revised process, contractors have to submit work sheets with tax calculations certified by a chartered accountant. Sources said these submissions have to “clearly show the difference in tax liability” before and after the implementation of GST. These will be scrutinised by the Railways’ finance department, and penal action taken if mistakes are found. The liability will be shared through the duration of contracts, said sources.
While the financial implication of the decision is yet to emerge, officials estimate that an additional burden of four per cent over the total annual bill value could emerge by the end of this fiscal.
Northern Railway, for instance, has around 2,500 ongoing contracts with an annual payout of approximately Rs 750 crore. There are a total 16 zonal railways. Special projects, like Kashmir link project, pays around Rs 1,800 crore every year to hundreds of such contracts.
”The ministry has taken a considered view through this new policy. The matter stands resolved now,” said Anurag Sachan, chief administrative officer of the Kashmir link project carrying out work worth Rs 10,000 crore.