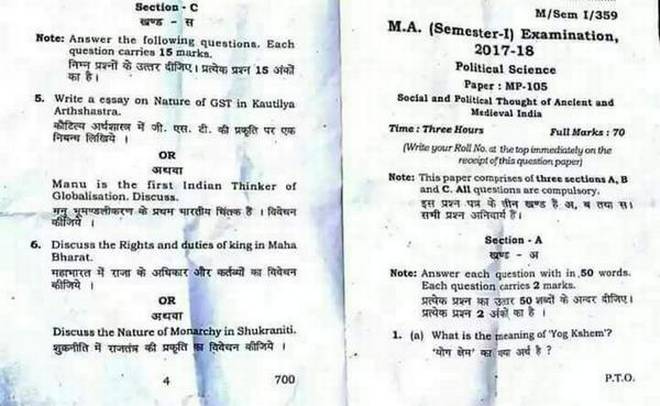 What did Kautilya, the erudite adviser of emperor Chandragupta Maurya, think of the Goods and Services Tax (GST)? This question is troubling students of the Banaras Hindu University’s political science department, for the marks they will score in the ongoing M.A. (first semester) exam depend on providing the correct answer.

Their paper for the subject ‘Social and Political Thought of Ancient and Medieval India’ had a question: “Write a essay on nature of GST in Kautilya Arthshastra.” It left most students scratching their heads, as Kautilya lived and died 2,300 years ago.

The paper wasn’t totally harsh, however. It gave a choice to perplexed students in case they did not know the nuances of the Mauryan GST regime. But the question that could be attempted instead of this wasn’t exactly a cakewalk either: “Manu is the first Indian thinker of globalisation. Discuss.”

Students who attempted the question paper have met some of their professors, seeking informed answers to these questions. A BHU professor, who did not wish to be named, said, “This is not part of what we teach here. Yes, Kautilya and Manu were influential thinkers of their times, but I doubt there was anything called GST or globalisation back then.”

BHU faculty were left wondering how such questions got through the moderation process. When contacted by The Hindu, the head of BHU’s political science department R.P. Singh said, “Paper-setting is done as per specialisation and expertise. It is the responsibility of the expert to set questions.”

M.N. Thakur, who teaches political science at Jawaharlal Nehru University, criticised the questions. “Even if one seeks to investigate whether there was a taxation system similar to today’s GST in the Arthashastra, it could at best be a research paper that we may judge on its merits. But in an exam that tests the knowledge of students in the areas taught, such questions have no place. Whoever set the paper has acted mindlessly,” Mr. Thakur told The Hindu over phone.

“As for ancient thought, there was universal thought as distinct from the particular. But in those times, there was no concept of the ‘global’ as we understand it today.”