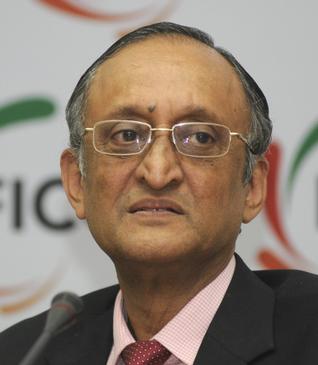 NEW DELHI, DEC 14:
States are facing a revenue shortfall of Rs. 39,111 crore in the first four months of rollout of the goods and services tax, West Bengal Finance Minister Amit Mitra said on Thursday. Addressing the annual general meeting of FICCI, Mitra said that revenue collections under GST have become a source of concern.

“For all States for the first four months, Rs. 1.72 lakh crore is required for revenue protection. Of this, States have received Rs. 1.33 lakh crore, while there is a shortfall of Rs. 39,111 crore,” he said.

Against the original estimated Rs. 55,000 crore compensation to States for the full fiscal, Mitra said that it will now be closer to Rs. 90,000 crore. Similarly, the Centre too is facing revenue shortfall from GST, he stressed.

However, Jammu and Kashmir Finance Minister Haseeb Drabu and Bihar Deputy Chief Minister Sushil Modi both expressed hope that revenue collections under GST will stabilise over the next few months. At a panel discussion on GST, all three noted the challenges being faced by the small and medium enterprises under GST and agreed that more needs to be done.

He also called for bringing back the reverse charge mechanism under GST that has been deferred till March. Significantly, Drabu also proposed doing away with the MRP (maximum retail price) under GST. “MRP is from a pre-lebralised era…We need to now abolish MRP to allow market forces and differently priced goods,” he said.

Sushil Modi also called for changes to the invoicing mechanism and said that the tax break-up should be visible in Bills. Laying out a roadmap for GST in the coming months, he said that the rates will be rationalised further to three to four slabs and efforts wil be made to include electricity, real estate, stamp duty and petroleum into the new levy.

He, however, cautioned the petroleum products, if and when included in GST will be taxed at the highest slab of 28 per cent and States will also have the power to levy additional taxes over GST. “This is done across the world to protect the revenue interests,” he said.

Sushil Modi also said that the E-Way Bill is likely to be rolled out across the country in a staggered manner from January 1.