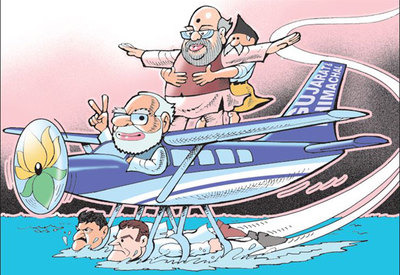 For Congress, demonetisation and the goods and services tax (GST) were the main weapons, apart from reservation for Patidars, in the election campaign as it sought to topple the BJP in Gujarat.
Rahul Gandhi and his team were trying to cash in on the anti-GST sentiment in Surat, the textile and diamond hub. Congress saw the moves from the Modi government as an opening in the mercantile state. The unrelenting focus on the two issues saw communalism, so far the principal charge against BJP, ignored.
The BJP, of course, pitched demonetisation as an anti-corruption tool and a class action, with Prime Minister Narendra Modi often asking his audience whether the scrapping of notes of Rs 500 and Rs 1,000 denomination last year had hurt them.
The bigger challenge was GST as the textile sector, unaccustomed to paying taxes, was brought into the net and complained bitterly about job losses and compliance problems. In June and July, Surat was the Ground Zero of protests as businessmen downed shutters against GST.
Rahul termed it “Gabbar Singh Tax”, drawing a quick response from Prime Minister Modi, who described the then Congress vice-president’s comment as a “grand stupid thought”.
But after the initial hiccups were tackled and several rough edges in GST removed, it seemed to have gained in acceptance, especially with a rate-cut sweetener for 200 mass-consumption products in November.

The result: voters chose to ignore the Congress campaign, which can be seen in BJP retaining all its seats in Surat and also sweeping urban Gujarat as a whole.

Although Congress and others will not immediately drop opposition to the two issues, they are sure to be less emphasised in coming battles. Memories of the pain of demonetisation have faded and more concessions seem to be in the offing on GST.
In fact, if it helps net more revenue in the run-up to the 2019 election, GST may end up helping BJP.