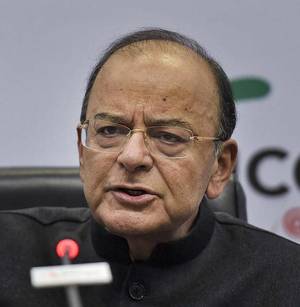 NEW DELHI: Union Finance Minister Arun Jaitley on Tuesday supported the idea of bringing petroleum products such as petrol, diesel and LPG (cooking gas) under the new Goods and Services Tax (GST) regime and hoped for the consensus of the states.
Responding to opposition concerns in the Rajya Sabha over not bringing petroleum under the GST net, Jailtey said, “We are in favour of bringing petroleum under GST.”
Former finance minister P Chidambaram popped the question in the upper house asking, “Now that BJP is in power in 19 states and at the Centre what prevents them from bringing petroleum products under GST? When will the GST Council take up this subject?”
To which Jaitley replied, “UPA also while presenting the draft of GST had not included petroleum under GST as they knew it would be a deal breaker between the states and the Centre if the petroleum brought under GST. We would await consensus of the states and hope states agree to the consensus sooner or later.”
Last week, Bihar Finance Minister Sushil Modi hinted that the GST Council will consider bringing electricity, petroleum products and some other items under the ambit of GST in future.
“Electricity, real estate, stamp duty and petroleum products should become part of GST (Goods and Services Tax). This would be our (GST Council) endeavour,” he said at the annual meet of industry chamber Ficci.
The current GST regime has five tax slabs – 0, 5, 12, 18 and 28 per cent. An additional GST cess is also levied on certain products.