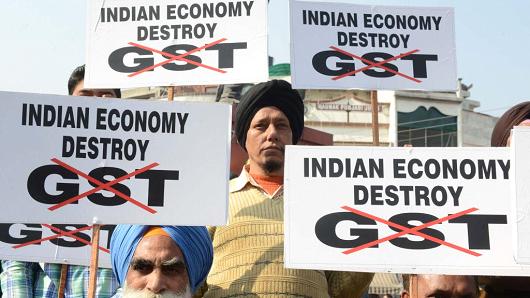 Five months since its implementation, the levy remains a hindrance for small and medium enterprises, many of which were already struggling with the rippling effects of last November’s demonetization measure.

Congress Party activists protest against the central Indian government and the Goods and Services Tax (GST) in Amritsar on November 25, 2017
Heralded as a game-changer, the roll-out of GST on July 1 was the biggest tax reform in Asia’s third-largest economy since independence. In replacing a mass of central, state, inter-state and local levies — among the most common complaints of foreign investors— a single duty was expected to transform India into a common market, bringing with it increased efficiency and lower corruption.

But those remain distant dreams for many small business owners, who remain encumbered by GST’s logistics.

Modi’s administration has promised to ease the burden on small and medium scale enterprises, with the PM stating in November that a committee will be looking into the matter. In the meantime, here are some of the biggest GST-related grievances faced by SMEs.

It’s really confusing
A lack of clear guidelines from the federal government is perhaps the most common complaint among small firms.

“GST has been an added impediment,” explained Aashna Singh, co-founder of New Delhi-based indie fashion label The OLIO Stories. “Not only because of an increase in tax rates but because of how confusing the roll out was and its shoddy implementation. Our regular chartered accountant couldn’t make sense of it.”

The picture is further complicated for certain industries that aren’t explicitly covered under the government’s new rates.

“They have clearly mentioned GST rates for movie tickets and classical music performances but haven’t clarified the same for other kinds of music acts,” explained Sohail Arora, founder and director of Krunk, a Mumbai-based booking and management agency for electronic music artists. As a result, his industry is “very confused,” he said.

For businesses still reeling from demonetization — Krunk’s growth was impacted while OLIO saw almost three months of weak sales — dealing with the complexities of the new GST a few months later didn’t help.

It’s not really ‘one tax’
The government’s official mantra on GST is ‘one nation, one tax,’ but that’s far from reality, businesses said.

“Separate registrations and separate returns have to be done for separate states where business is established,” explained Kaushal Dugar, founder of Teabox, an online tea retailer based in the northern town of Darjeeling.

Moreover, the required number of annual filings have increased from 13 to 37. “It would be much better if we can combine all GST returns into a single returns structure,” said Dugar.

Rates are higher for many industries
Apparel that boasts a price tag above 1,000 Indian rupees ($15) — the majority of branded garments in India’s competitive retail landscape — now commands a 12 percent tax, up from roughly 7 percent previously.

OLIO decided to absorb the extra cost instead of transferring it to customers “because in this price sensitive market, even a few 100 rupees could affect our sales,” explained Singh.

“The worst part is if you are late in paying GST, they add a 200 rupee [$3.10] daily penalty charge,” said Arora. “I find this ridiculous given when the government has to refund income tax returns at year-end, they take their own sweet time, often three to six months.”

It favors registered companies
Like countless other businesses, OLIO relies on platforms such as Facebook, MailChimp and Shopify to connect with international customers. But using services from organizations that aren’t GST-registered means paying tax on their behalf, Singh explained.

Companies can later claim those fees from the government, but paying that initial amount up front significantly affects the working capital for an up-and-coming label like OLIO, Singh said.

“The government is also strong arming us to disassociate from small local vendors that aren’t registered, so we had to look for more established vendors for small matters, such as fabric dyeing and buttons, which increased costs,” she added.