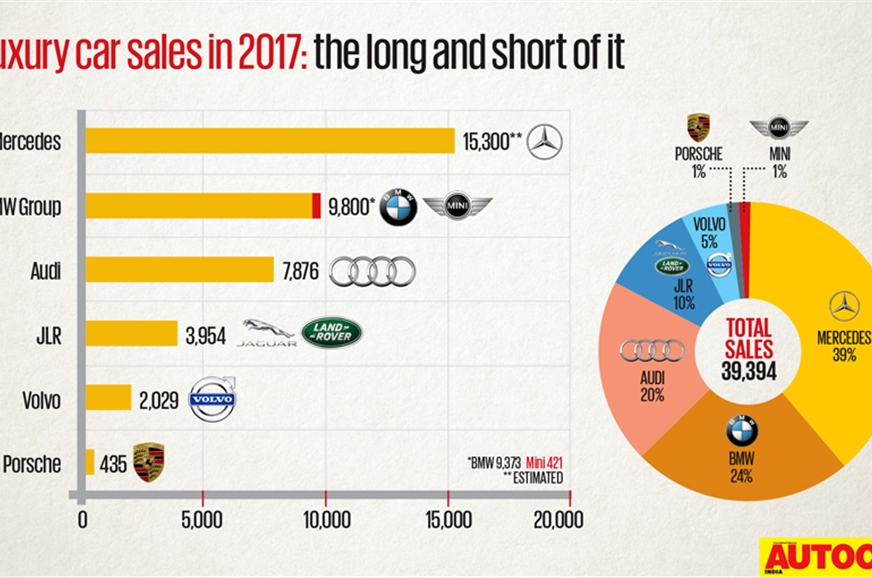 Mercedes-Benz India has reinforced its leadership position in the country’s luxury vehicle market as it recorded its highest-ever sales of around 15,300 units in 2017 (Jan-Dec) despite facing a setback due to the upward revision in GST rates. The German luxury vehicle brand clocked a sales growth of nearly 16 percent from 13,231 units sold in 2016, according to sources. With this stellar performance, it has raced further ahead of key rivals such as BMW, Audi, Jaguar Land Rover and Volvo to achieve a comfortable lead.

Audi India struggled to find traction as it saw volumes grow moderately by just 2 percent to 7,876 units. The German luxury automaker cited the GST cess hike for its poor performance. “GST disturbed the positive momentum gathered by the initial decline in prices. Uncertainty in the minds of customers had a negative impact on us,” said Rahil Ansari, Head, Audi India in an official statement.

However, Audi was the only company unable to counter the impact of GST; and after being the country’s highest selling luxury carmaker in 2014, it has struggled to keep up with its other German rivals.

Commenting on the performance, Vikram Pawah, president, BMW Group India, said, “While the automotive industry was adversely affected by several policy fluctuations, we were able to achieve successful growth due to our all-round strategy.”

The Indian arm of British carmaker Jaguar Land Rover has emerged as the fastest growing luxury brand. It sold 3,954 units in 2017, up by a massive 49 percent over the previous year.

Rohit Suri, president and MD, Jaguar Land Rover told Autocar that this growth was achieved on the back of the upbeat performances of key models like the XE diesel, F-Pace and the Discovery Sport. He went on to say that spurt in demand for the locally-assembled F-Pace following the nearly Rs 20 lakh price-cut supported sales in December.

Swedish carmaker Volvo has also closed 2017 with a significant jump in volume. It sold 2,029 vehicles in India in 2017, a growth of 28 percent from the 1,584 units sold in 2016. Volvo recently launched the XC60 in India and is gearing up to double its dealership network over the next two years. A company spokesperson said Volvo has been largely unaffected by GST as the tax revision had a nullifying effect on its volumes. The initial spurt in sales was balanced out by the slight impact on volumes due to uncertainty after the rates were revised.

German performance car brand Porsche sold 435 units in 2017, up 10 percent over the previous year. Growth was led by the current second-generation Cayenne, which is in its run-out phase and due for a replacement, this year. Porsche is set to introduce the all-new SUV, around June. The Cayenne is key to Porsche’s ambition of expanding its volumes in India and is expected to extend Porsche’s growth charge in 2018.