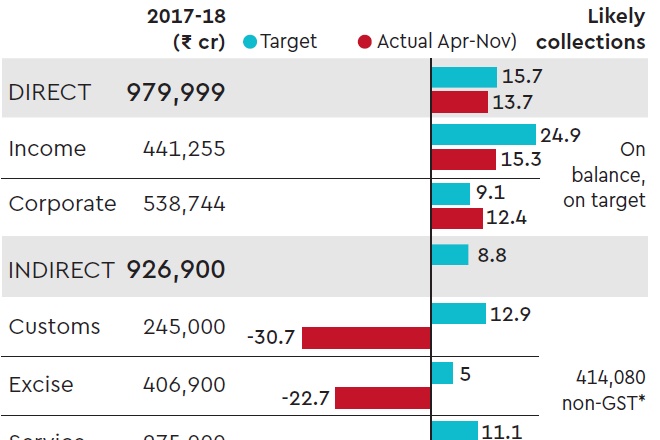 With a likely shortfall in GST collections for 2017-18, the government is expected to hold back a big chunk of unallocated Rs 1.2 lakh crore of IGST (integrated goods and services tax) to ensure the fiscal deficit doesn’t slip by more than 20 basis points. Economists point out that the revenues foregone on account of the cut in excise duties on auto fuels, smaller dividends from the Reserve Bank of India (RBI) and lower-than-expected receipts from telecom may result in the fiscal deficit coming in at 3.5% of GDP against the targeted 3.2%. While collections from personal income tax might be lower than those baked into Budget estimates, this could be made up with higher-than-budgeted corporation taxes. Moreover, the disinvestment target of Rs 72,000 crore could be overshot by a big margin of Rs 25,000-30,000 crore if the sale of HPCL to ONGC goes through. The government has said it will borrow an additional Rs 50,000 crore by way of dated securities.

If the government doesn’t hold on to the IGST, but allocates it to the states, the shortfall in revenues for 2017-18 could be in the region of Rs 1 lakh crore, say economists. Based on average GST collections of Rs 95,000 crore a month, or Rs 8.55 lakh crore for nine months, the Centre’s share would be Rs 4.3 lakh crore. This together with revenues from basic customs duty and duties from petroleum and diesel, both outside the purview of the GST, should fetch the government Rs 4.14 lakh crore. Thus, the Centre would earn Rs 8.44 lakh crore from indirect taxes, around Rs 80,000 crore less than the Rs 9.26 lakh crore it had pencilled in. This gap is expected to be bridged by the IGST — a share of which the Centre should allocate to the states.

IGST forms the biggest chunk of GST collections and is paid when there is a transfer of goods from one state to another. The IGST is allocated between CGST and SGST when the final transaction takes place. Also, a part of the IGST is paid by importers and exporters which might have to be refunded. The total GST collections between July and November have been Rs 4.39 lakh crore, though the number could be revised upwards as more data comes in. The Centre’s share of this is `69,100 crore, smaller than the states’ share of Rs 1.02 lakh crore, probably due to assessees having claimed more transition credit from the Centre. Indeed, of the total collections of CGST and IGST on imports, the Centre’s share is just 24%.

Going by the trend in the year so far, the target for direct tax revenues — corporation and personal income tax — of Rs 9.8 lakh crore, should be met. A slight shortfall in personal income taxes — which grew at 15.3% in the eight months to November, well below the targeted growth rate of 24.9%, should be compensated by higher than anticipated corporation taxes, which grew at 12.4%.

The mop up from disinvestments is expected to cross the target of Rs 72,000 crore, especially if the purchase of HPCL by ONGC goes through; the transaction is expected to fetch the exchequer close to Rs 30,000 crore. However, telecom receipts, estimated at Rs 44,300 crore could come in closer to Rs 35,000 crore. Also, while the government had pencilled in dividends of Rs 58,000 crore from the RBI, it has so far received only Rs 30,650 crore.