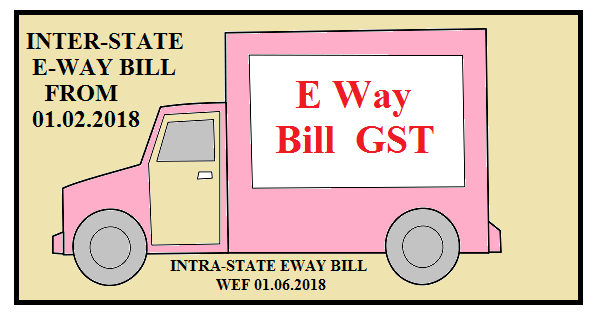 he Finance Ministry has rolled out the nationwide e-way Bill System for inter-state movement of goods on trial basis from Tuesday.

The GST provision requiring transporters to carry an electronic waybill will be implemented from February 1 for inter-state movements.

The e-way bill system eliminates the need for transit passes for inter-State movements of goods and works on the self-declaration model, according to a commercial taxes department release.

The e-way bills can be generated through the portal by giving details such as invoice related to the consignment, vehicle details, tax value, GST rates, among others. A copy of the bill will be sent as an SMS to the registered mobile number.

When such an e-way bill is generated, a unique e-way bill number (EBN) is allocated and is available to the supplier, recipient, and the transporter.

A pilot of the e-way bill has been successfully run in Karnataka. Besides checking rampant tax evasion, the government expects an increase in revenue up to 20 per cent after the nationwide launch, a top government official told PTI.

An e-way bill is mandatory for movements of goods valued at ₹50,000 and above.

The GST Council had decided to implement the entire e-way bill mechanism, covering intra-state movements too, throughout the country by June 1.

After the implementation of the Goods and Services Tax (GST) from July 1 last year, the requirement of carrying e-way bill was postponed pending IT network readiness.

The rules for the implementation of nationwide e-way bill system for inter-state movement of goods on a compulsory basis is expected to be finalised in the GST Council meet on Wednesday and will be notified with effect from February 1, 2018.