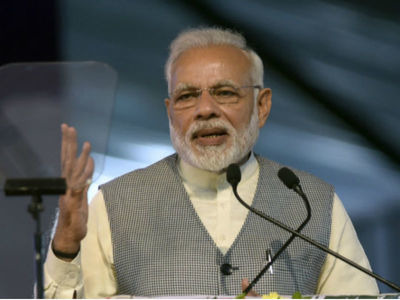 NEW DELHI: Six months into the rollout and after dozens of changes, Prime Minister Narendra Modi on Sunday said he is open to more changes in the GST to plug loopholes and make it a more efficient tax.
He also attacked those opposing the Goods and Services Tax (GST), saying they were “insulting” Parliament.

In an interview to Times Now news channel, he compared the new law with that for income tax, asking how many changes and improvements have been made in the income tax law since its inception in 1961.

“The GST too is a new system. I have been saying this since the day one that people will take some time to adjust to the new system,” he said. “We will have to improve wherever there are loopholes.”

He said a united attempt should be made to develop an efficient system even it requires six months or two years. “Everyone should attempt to deliver a product to this nation which will be useful for a longer period. This is a process and our intention is good. Our efforts are underway.”

PM Modi said, “We are using all our knowledge in that direction. Everyone should make combined efforts for good things. Will you only see your political greed in everything?”

The rollout of the GST, which subsumed more than a dozen central and state levies, from July 1 has been far from being smooth with problems ranging from increased tax rates on some items and services to a higher compliance burden for businesses and IT issues.

To address them, tax rates on dozens of items have been cut, compliance process eased and simpler administration introduced.

In the interview, PM Modi said no one has actually opposed the GST and everyone theoretically accepts the concept of one-nation-one-tax, which Parliament approved after debating for seven years.

Without taking any names, he said those who previously were in the government are now “opposing the GST and are foul mouthing it.”

Congress president Rahul Gandhi had in the run-up to last month’s Assembly elections in Gujarat, dubbed the GST as ‘Gabbar Singh-Tax’.

PMModi said all political parties came together and created the GST Council, the highest decision-making body for the new indirect tax regime.

The panel has equal representation from all states and they have equal weightage as that of the Centre. All decisions are taken through consensus.

“Every decision is unanimous. Never has the opportunity of a vote arisen,” he said, adding that chief ministers of opposition parties have also participated in the decision- making process.

“While inside the meeting, everyone is laughing, playing around and taking a decision. But once the meeting is over, they come out and show anger, aggression and threats,” the prime minister said.

“Inside we are taking decisions on the GST harmoniously and outside they are displaying otherwise,” Modi said.

Similar is the case with Parliament where debates are open and conducted harmoniously but outside anger is shown, he said.

“People of this country know this very well,” he said.