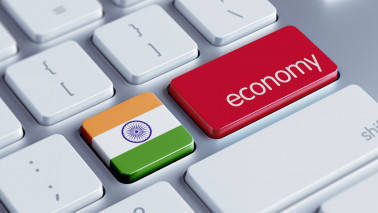 The annual Economic Survey hit an upbeat note on Monday, predicting that India would grow at 7-7.5% in 2018-2019 as it shakes off the disruptive effects of demonetisation, and the benefits of the Goods and Services Tax (GST) kick in.

“A series of major reforms undertaken over the past year will allow real GDP growth to reach 6.75 percent this fiscal and will rise to 7 to 7.5 percent in 2018-19, thereby re-instating India as the world’s fastest growing major economy,” said the Economic Survey 2017-18 tabled in Parliament on Monday.

“With world growth likely to witness moderate improvement in 2018, expectation of greater stability in GST, likely recovery in investment levels, and ongoing structural reforms, among others, should be supporting higher growth. On balance, country’s economic performance should witness an improvement in 2018-19,” it said, though it cautioned on rising oil prices, a factor that could feed inflation and keep interest rates elevated.

The survey favoured shutting down or merging struggling banks and identified employment, education and agriculture as the three key focus reform areas in the medium term.

The Economic Survey’s growth estimate for the current year (2017-18), at 6.75 percent, is marginally higher than the Central Statistics Office’s (CSO) 6.5 percent growth released at the beginning of the month.

The survey’s forecast for 2017-18 is at the lower end of the forecast band it issued last year. The survey had projected that India’s real or inflation adjusted GDP would grow at 6.75 to 7.5 percent in 2017-18, an assessment that was made in the shadow of Prime Minister Narendra Modi’s cash ban announced in late 2016.

Implicit calculations from the CSO data suggest that India’s real or inflation-adjusted GDP will grow at 7 percent in October-March, a trend that the Economic Survey also underlined on Monday.

High-frequency data such as car and commercial vehicle sales signal an improvement in the underlying trends, mirroring a smart rebound in household spending.

The chapter titled “ A New, Exciting Bird’s-Eye View of the Indian Economy Through the GST” indicates that India may soon reach a steady state on GST, which has been characterised by multiple rate changes, teething problems on return filing and procedural irritants since it kicked in from July  1 after a grand midnight event in Parliament.

A preliminary analysis shows that there has been a 50 percent increase in the number of indirect taxpayers, besides a large increase in voluntary registrations, especially by small enterprises that buy from large enterprises and want to avail Input Tax Credits (ITC), deductions for taxes already paid.

As on December 2017, there were 9.8 million unique GST registrants, slightly more than the total indirect tax registrants under the old system (where many taxpayers were registered under several taxes).

It also underlines that the distribution of the GST base among the States is closely linked to the size of their economies, allaying fears of major producing states that the shift to the new system would undermine their tax collections.

The survey also flagged the need to address the issues of pendency in dispute resolution to turn the country into a more business-friendly place.

The survey said that demonetisation has helped the share of financial savings rise.

Since investment slowdowns are more detrimental to growth than savings slowdown, so, policy priorities over the short run have focused on reviving investment by mobilizing saving, through attempts to unearth black money and encouraging the conversion of gold into financial saving.

“The share of financial saving is already rising in aggregate household saving – with a clear shift visible towards market instruments – a phenomenon that has been helped by demonetization,” it said.

The survey cautioned about rising crude oil prices, a development that policymakers will have to factor in in the coming months.

“Against the emerging macroeconomic concerns, policy vigilance will be necessary in the coming year, especially if high international oil prices persist or elevated stock prices correct sharply, provoking a “sudden stall” in capital flows,” it said.

The agenda for the next year consequently remains full: stabilizing the GST, completing the twin balance sheet (TBS) –banks and defaulting companies—actions, privatizing Air India, and staving off  threats to macro-economic stability.

It also obliquely hinted at the need to shut down or merge struggling banks.

Over the medium term, three areas of policy focus stand out: employment, education and agriculture.

“Employment: finding good jobs for the young and burgeoning workforce, especially for women. Education: creating an educated and healthy labor force. Agriculture: raising farm productivity while strengthening agricultural resilience. Above all, India must continue improving the climate for rapid economic growth on the strength of the only two truly sustainable engines—private investment and exports,” it said.

The survey said that the jobs crisis was not as bad as it has been made out to be in public commentaries, with evidence of substantial hiring in the formal sector.

“India’s formal sector, especially formal non-farm payroll, is substantially greater than what it currently is believed to be. It became evident that when “formality” was defined in terms of social security provisions like EPFO/ESIC the formal sector payroll was found to be about 31 percent of the non-agricultural work force,” the Survey noted.

When “formality” was defined in terms of being part of the GST net, such formal sector payroll share was found to be 53 percent, it said.

An unrelenting Opposition has spared no punches in pinning down the Modi- government’s failure to create enough opportunities to the armies of young people who join the queue of hopefuls every year.

Pulak Ghosh, Professor, Indian Institute of Management (IIM), Bangalore and Soumya Kanti Ghosh, Chief Economic Adviser, in a recent report claimed that 70 lakh new ‘payroll’ jobs will be created in India in the organised sector in 2017-18.

According to the report, ‘payroll’ job is a job where the employee has enrolled under the Employees’ Provident Fund Organisation (EPFO) or Employees’ State Insurance Corporation (ESIC) or National Pension Scheme (NPS) or Government Provident Fund (GPF). The report has triggered a policy debate, with many contesting the findings.