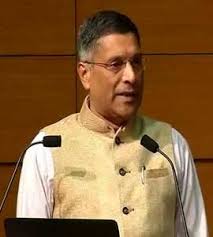 New Delhi: Amid spiralling petrol and diesel prices, Chief Economic Advisor Arvind Subramanian on Monday called for petroleum products to be brought under the ambit of the Goods and Services Tax (GST).

He also made a case for one rate under the GST for all goods and services down the line.

Petrol and diesel prices rose last week to a three-year high across metro cities. Petrol prices in the national capital were at Rs. 72.49 per litre — the highest in over three years. Petrol prices in Kolkata, Mumbai and Chennai were at Rs. 75.19, Rs. 80.39 and Rs. 75.18 per litre respectively — all three-year highs. Similarly, diesel prices have also been hitting record levels.

During a press conference after Finance Minister Arun Jaitley tabled India’s Economic Survey for 2017-18 in parliament, the Chief Economic Advisor also made a case for one GST rate for all goods and services.

“Over some horizon – say three to five years – we can think, in principle, of having one rate because we see that benefits of that are so compelling.

“Let’s not make the best the enemy of the good. I think we can get from a very complex to a less complex one,” he said.