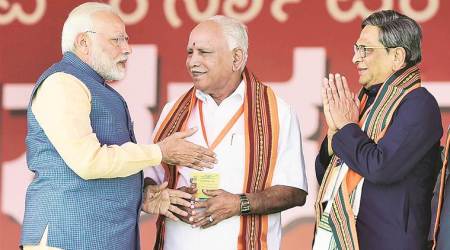 From attacking the Congress for naming GST as Gabbar Singh Tax to chest-thumping about the Namo healthcare scheme, and drafting the Triple Talaq bill, BJP president Amit Shah’s motion of thanks to the President was basically a report card of the Modi regime’s four years in power interspersed with moments of flaying the opposition party.

Here are the top ten quotes of BJP chief Amit Shah’s maiden speech in the Parliament:

1) On Goods and Services Tax

“Nobody imagined that GST would be implemented at such a large-scale. During UPA regime, BJP never opposed GST, it opposed the methods. People are talking about GST in a manner as if it would destroy small businesses in the country. I have studied the GST and I am telling you that nothing of that sort will happen”

2) On passing GST benefits to poor and army men

“What kind of politics is this when Congress leaders give their approval for GST in the Council meetings but oppose it in the Parliament. They call it the Gabbar Singh Tax. Gabbar Singh was a dacoit. Using law to collect tax from people, is it dacoity? And where is this money used? It is used for one rank one pension. It is used to provide gas to the poor”

“Muslim women went to different courts of India for their rights. The court had given a judgment during Shah Bano’s case but Congress made a law to bypass this. This time, they stopped the Bill in Rajya Sabha. If they don’t have any objections, we can bring the Bill tomorrow as well.”

4) On safety in Kashmir

“Kashmir is an important issue for the country. In the past 35 years, Kashmir is the most safe now. Terrorists and militants are now behind the bars after we came to power”

5) At par with US and Israel in protecting borders

6) On Namo healthcare or Ayushmaan Bharat

“One can go through all the democracies in the world, none of them had the courage to give health insurance of Rs 5 lakh to 50 crore people. I know some people will make noise about this but we have decided to call Ayushmaan Bharat as Namo healthcare now.” Government announced two major initiatives in health sector as part of Ayushman Bharat programme while presenting the Union Budget 2018-19 in the Parliament.

“I am not denying there is unemployment. But this is after you ruled the country for 55 years. Why couldn’t Congress find the solution to this. I was just reading Chidambaram’s tweet. I believe it is better to work hard by selling pakodas rather than be unemployed. What sort of a mentality is it when you compare a pakoda-seller to a beggar?”

8) On caste politics and simultaneous elections

“PM Modi in his leadership has ended the prevalence of caste, dynasty and appeasement from India politics. Simultaneous elections will help in cost control in conducting polls, urges all parties to come together over the proposal of a simultaneous election”

9) On transparency in governance

“The female ratio is increasing in states, the literacy rate is improving and initiatives like DBT has helped people benefit from government funds and saved Rs 57,000 crore”

There is no doubt that with the speech, highlighting the developments of the government and the reiterating the Budget sops, Shah has his eyes firmly fixed at the upcoming elections in three north-eastern states (Nagaland, Tripura and Meghalaya) and Karnataka, where BJP does not have a government.