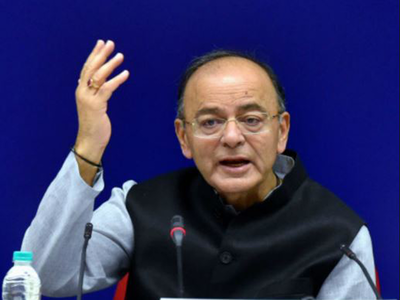 NEW DELHI: Finance minister Arun Jaitley on Thursday said that despite the noise about demonetisation hurting the economy, the growth rate expected to moderate from 7.1% in FY17 to 6.7% in FY18 and the slowdown was partly due to de-stocking ahead of the GST launch in July.
“Demonetisation had its own disruptive impact. India’s growth rate was 7.1% last year. Was there a two percentage point decline next year?” the minister said in the Lok Sabha, while replying to the Budget discussion. He added that India is projected to regain the tag of being the fastest growing major economy next year.

Taking off from where PM Narendra Modi left on Wednesday, the FM said that the government had inherited a weak economy with high fiscal deficit and high inflation.

He said that the government had undertaken several structural reforms – from GST and the Insolvency Code to linking subsidies with Aadhaar, something that he accused the previous UPA-led government of abandoning. “The difference between UPA and NDA is that we know how to bite the bullet when decisions have to be taken.”

The FM said that GST, which took a long time to settle in many countries, had stabilised within months due to the efforts of the Centre and all state governments had created room to rationalise rates.

Countering charges of keeping the rates high, Jaitley said that in the first stage the levy was lowered to 28% from the combined 31% earlier and now goods and services were being moved into the 18% bracket. He indicated that if the trend continued, the GST Council will rationalise rates further.

Amid complaints that the middle class had been ignored in the Budget, Jaitley said that all his Budgets had something for this segment and even this time he had offered benefits. He said that the standard deduction along with the benefits for senior citizens will result in a revenue loss of Rs 12,000 crore to the Centre.