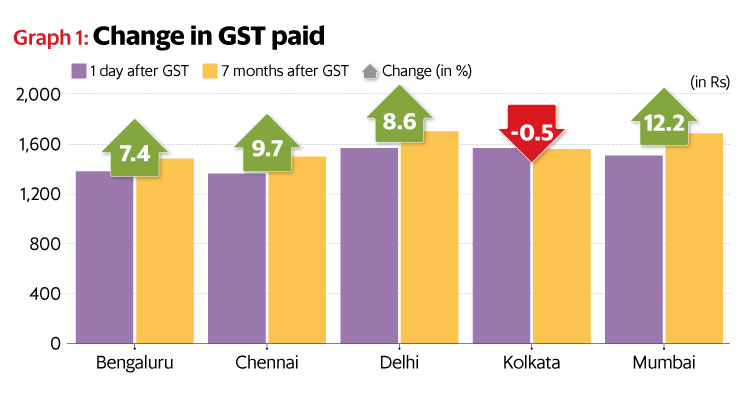 A look at prices of goods that make up an average middle-class shopping cart, at five points of time after GST, for the five main metros

The goods and services tax (GST)—which subsumed multiple indirect taxes at the central and state levels—completes eight months on 1 March. How has it impacted consumers and the companies that service them? To answer this, we looked at prices of goods that make up an average middle-class shopping cart, at five points of time after GST, for the five main metros.

We sourced prices from India’s largest online grocer BigBasket’s website for 71 items, covering 18 categories of the consumer price index. GST was applicable on 47 of these items, and the total billed amount for this basket was around Rs7,000, of which GST was between Rs1,300 and Rs1,700 depending on the city.

What companies are paying as tax: Up

Other than in Kolkata, the amount companies paid as tax under GST for our basket is higher now than when the new indirect tax system was launched (see graph 1 below). This could be on account of companies facing higher costs. At the same time, prices paid by consumers have not increased by a similar degree—in fact, they have fallen in most cases. This suggests companies are facing higher costs, but are unable to pass it on; or that they are not passing it on to avoid being seen to be profiteering by the government.

What consumers are paying as prices: Down

Consumers, though, are paying less for this shopping basket. There are two prices of consequence here. The first is the maximum retail price (MRP), or the price listed on the packet.The second is the selling price (SP), which factors in discounts given by a retailer (here, BigBasket).

At the MRP level, the price of the overall shopping basket has increased in some instances, notably in Delhi, or has fallen marginally (graph 2). But at the SP level, the consumer is better off. Companies are unable to increase prices and retailers are extending greater discounts to keep customers (graph 3).