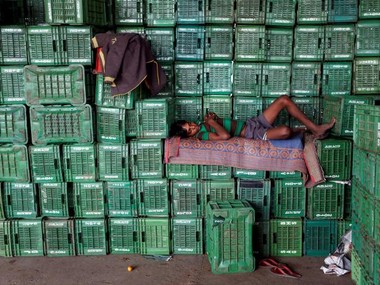 New Delhi: Describing recent speculation on GST collection targets for the current and next fiscals as being “overtly aggressive”, state-run State Bank of India on Monday estimated that the Goods and Services Tax collection for 2018-19 would grow at a rate of 14-16 percent, bringing it closer to the decadal growth rate in indirect taxes of just under 14 percent.

In an SBI Ecowrap report titled “The Arithmetic of GST Collections”, Chief Economist Soumya Kanti Ghosh noted that the speculative collection target pegged at Rs 7.4 lakh crore is 67 percent higher than the revised estimates (RE) for the financial year 2017-18.

Noting that GST receipts during the current fiscal will only be for 9 months as the new indirect tax regime was implemented from July, and factoring in the assumption that Integrated GST (IGST) should be equally shared between the Centre and states, the report said that “GST for financial year (FY) 2019 (9 months’ estimates) thus comes to 15.8 percent”.

“If we take 8 months’ estimate, the growth rate further reduces to 13.5 percent. Thus, the GST collections growth rate for FY19 comes to around 14-16 percent, that is similar to the decadal gross tax revenue growth rate at 13.9 percent.”

“There have been several speculations in public domain that the GST collections in current fiscal and budget estimates for FY19 are overtly aggressive, but these are flawed,” Ghosh said.

“The target for GST is pegged at Rs 7.4 lakh crore that is 67 percent higher than FY18 RE. However, under the new GST regime, the last date for filing of GST returns is 20th of the succeeding month, even on the last day of the financial year.

“This means that the GST receipts during the current year will only be for 9 months as GST was implemented in July. Hence any analysis needs to take this into account when considering this growth.”

Referring to the “wild speculation” in the public domain that the IGST figures are taken in their entirety without separating the share of the states, Ghosh said: “This is wrong, as the data of GST collections show that gross IGST collections are going to touch around Rs 4.01 lakh crore in FY18, of which 60 percent has been transferred to states and rest Rs 1.61 lakh crore are shown in FY18 revised estimates.”

“However, IGST collections of Rs 4.01 lakh crore should be equally split between the Centre and states. If that happens, then the extra 10 percent will get transferred to the Centre leading to upward revision of FY18 estimates,” he added.

SBI said the country’s gross tax revenue is expected to grow by 16.7 percent in the next fiscal to Rs 19.1 lakh crore, which estimate is supported by a “10.2 percent growth in corporation tax and 20.4 percent rise in personal income tax”.

“It seems that the revenue targets of the government for FY19 are reasonable,” the report concluded.