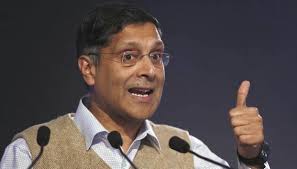 New Delhi, Mar 28 () Chief Economic Advisor Arvind Subramanian today made a case for developing a clear protocol for sharing of GST data with government departments, saying it is a reflection on state’s capacity and can also be used to estimate GDP in a better manner.

He further said that the introduction of e-way bill and matching of invoices will enormously help in increasing tax buoyancy and revenue collection.

Speaking at an event to mark GST Network Foundation Day, Subramanian said GST data will provide better insights into economy, formal sector employment and exports and has the potential to improve statistical indicators on a real-time basis.

“The GST data, which GSTN is compiling, will truly transform the way we estimate all our numbers… On monthly basis we can produce high frequency numbers on the economy which we could not do earlier.

“That means that you (GSTN) and other parts of government will have to develop clear protocol on how you share the data, what are the conditions under which it should be shared because it’s also about state capacity,” he said.

GSTN is handling the IT backbone for the new indirect tax regime. So far 1.05 crore businesses have registered on the portal and are required to file GST returns periodically.

He said most countries compute economic growth data from demand side, as against the consumption led estimates by India. The GST data, Subramanian said, could help in computing GDP growth based on demand side data on quarterly basis.

“We (GSTN) are just at early stages. In terms of what kind of skill and training the GSTN have to acquire, the breadth will have to be increased much more than what it is. In initial stage it (GSTN) is much more IT focussed, fire fighting focussed. Over time this is going to evolve much more,” he said.

“I think there is going to be enormous scope for increasing tax buoyancy because we are only beginning to start (getting) the benefits from (invoice) matching, e-way bill and further simplification… I expect GST to be a highly buoyant source of revenue over the medium term,” Subramanian said.

Observing that honest bureaucrats are often not willing to take bold decision because of the fear of investigative agencies, he said GSTN “is a genius of public private partnership where you actually facilitate bold decision making, which I think has been exceptional”. JD CS MKJ MKJ