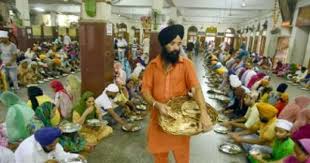 The Lucknow Gurudwara Pabandhak Committee (LGPC) today made a demand for immediate withdrawal of GST on ‘langar’ — community meal — services offered by the all Sikh shrines across the country, including the Golden Temple at Amritsar.

Earlier, the Shiromani Gurudwara Parbandhak Committee (SGPC), which manages all gurdwaras, and Union Food Processing Minister Harsimrat Kaur Badal has also urged the Centre to exempt the free kitchens at the Golden Temple and other Sikh shrines from the purview of the Goods and Services Tax (GST).

“This is for the first time in the 450 year history of the Gurudwaras that GST was being levied on ‘langar’ service,” LGPC President Rajendra Singh Bagga said while addressing a press conference here.

He urged the government for immediate withdrawal of the GST on free meal services offered by all the Gurudwaras in the country, and called the levying of GST on free kitchens at Sikh shrines as “unfair”

Former Uttar Pradesh minister and MLC Balwant Singh Ramoowalia, who was also present in the conference, said the Sikh society was highly agitated over the decision to impose GST on ‘langar’.

He claimed that till December 31, 2017, the Centre had collected Rs 2 crore from the Gurudwaras.

Importantly, the GST is not served on food served in langars itself, but is charged on the purchase of raw materials used to prepare the food.

While the LGPC president asserted that gurudwaras all over have always done good for the society by distributing free food, medicines and clothes during the time of natural calamities and social strife, the LGPC general secretary Harpal Singh Jaggi wondered why the Centre was imposing tax on a social service appreciated and lauded by people world over.

Under the new GST Act, there is a provision for exemption to institutions and businesses on the recommendation of the GST Council.