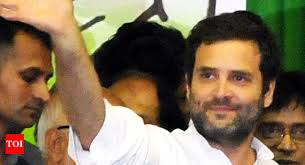 BENGALURU: Congresspresident Rahul Gandhi on Sunday tore into the Modi government, describing the GST (goods and services tax) as the most complex tax structure, comparable “only to those in Pakistan and Sudan”, and promised a compassionate, single-slab tax regime when the Congress comes to power in the next elections.
“We will comprehensively

look at the GST and provide you a simple taxation that doesn’t punish you. The current GST is the most complex, and only Pakistan and Sudan have a similar regime. We will give you a GST that includes petroleum products,” Rahul Gandhi said in reply to a query from a trade group representative in Bengaluru.

For some months now, Gandhi has been terming GST the ‘Gabbar Singh Tax’ because of its complex architecture. He said he didn’t agree with the BJP-designed GST, as it encourages only corruption and rent-seeking.

The Congress leader expressed discontent over the way banks are run, which has led to a “phenomenal rise” in non-performing assets. “You have examples of Nirav Modi and Piyush Goyal. We are heading into serious bad weather on the financial front. I don’t think the government has a good sense on what’s to be done,” he said.

Pontiff slams seers’ call to vote for Cong
Division among the Lingayat mutt seers was evident on Sunday after Rambhapuri Mutt pontiff Veerasomeshwara Shivacharya Swami slammed the seers for openly urging the community members to support the Congress in the May 12 assembly elections. About 50 seers of Lingayat mutts, under the banner ‘Forum of Lingayat Seers’, had met in Bengaluru on Saturday and urged the community to support Congress. Page 4

Rahul Gandhi said the country was paying a heavy price because of the government’s misguided decisions on demonetization, GST and Nirav Modi.

“The government has not been listening to professionals. Demonetization is an example where Raghuram Rajan (former RBI governor) left the central bank because the government wanted to do something he didn’t agree with. In case of demonetization, Arun Jaitleyji and the chief economic adviser weren’t told. The PM thought he could dictate the financial policy, and nowhe’s finding that he can’t do that. The country is paying a price,” he said.

He said the key theme of his government would be job creation, as China will remain India’s main competitor for 20-30 years. “We’ve to show our youngsters we deliver jobs for them,” he added.