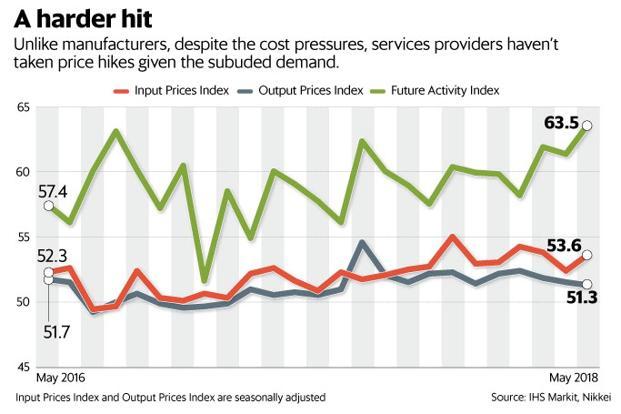 Activity in India’s services industry contracted for the first time in three months, hurt by sluggish growth in new orders. The headline Nikkei India Services Purchasing Managers’ Index (PMI) fell to 49.6 in May from 51.4 in the previous month. A reading above 50 indicates economic expansion, while one below 50 shows contraction.

However, business optimism inched to its highest level since 2015, indicating companies anticipate a demand revival in the year ahead. Considering the sector’s dismal performance in May, this provides a glimmer of hope.

“Higher salaries, as well as prices for fuel and vegetables were reported to have increased in the latest survey period. Despite registering below the historical average, input cost inflation picked up from April’s eight-month low and was solid overall. Information & Communication recorded the fastest rise in costs,” said the PMI report for May.

What’s worse, unlike manufacturers, services providers have not been able to fully pass on the burden of higher costs to price-sensitive customers. Consequently, services sector output price sub-index moderated to an 11-month low at 51.3.

No wonder, despite the increase in business confidence, companies in the services sector are turning more cautious about hiring, due to which the pace of job creation was the weakest so far this year.

It should be noted that between services providers and manufacturers, the former has been impacted more in the goods and services tax (GST) era, both in terms of demand and cost of compliance.

Under GST, services are taxed at a rate of 18%, higher than the 15% levied earlier—this impacted demand for discretionary services. Also, services providers are required to get state-wise registration done for each state they operate in. In the earlier regime, a central registration was sufficient.

Though GST-related teething troubles are largely out of the way, the inability of services providers to resort to price hikes clearly indicates they are poised to take a harder knock on margins than manufacturers.