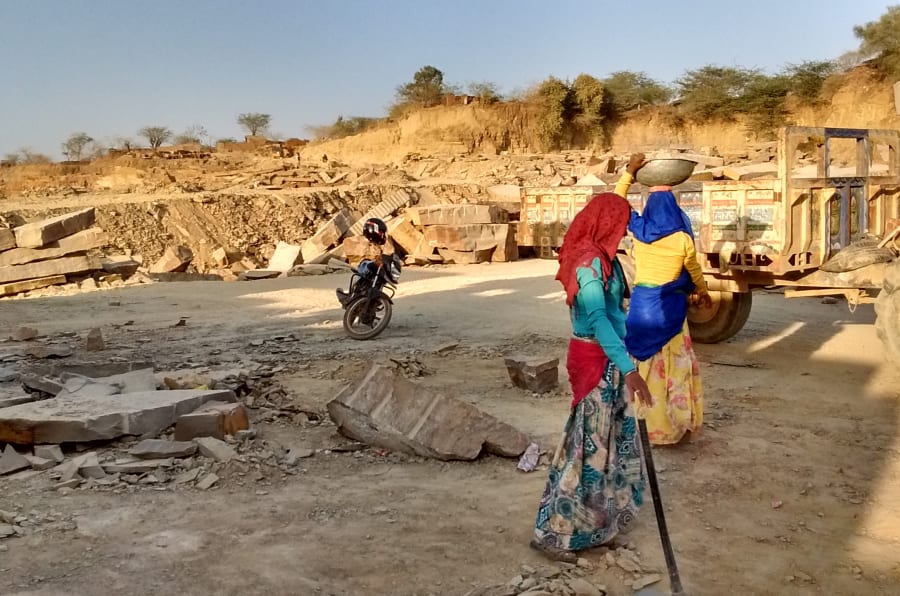 Murli Banjara, who wore a greying mustache and a fading red gamcha, squinted up at the sun, which was now almost overhead. It was now close to noon. After waiting for five hours, Banjara appeared resigned to another day of unemployment.

“The worker is paying for the GST,” he remarked, claiming work had dried up as an effect of the Goods and Services Taxes, that was introduced almost a year ago in July 2017.

For 20 years, Banjara had supplemented his unreliable income from ploughing the arid land by lifting sandstone slabs in the quarries in Bijolia. At the quarries, he worked as a hamaal worker, who loads sandstone on mining trucks. Now for the first time in two decades, Banjara said he was without work.

Banjara’s fellow workers said they had witnessed drastic cuts in work opportunities even during what were usually the peak weeks of quarrying before the rains.

Get top stories and blog posts emailed to me each day. Newsletters may offer personalized content or advertisements. Learn more

“Every year, over a thousand of us gather at Shakkargarh chowk daily,” said Heera Lal Meena, also works as a hamaal worker loading stones. “This year, only 200 of us are coming here, and even of that, 100 return home empty-handed every day.”

Rajasthan’s sandstone industry offers a fascinating instance of how economic policy percolates through the many layers of India’s formal and informal economy.

The GST’s short-term economic disruptions have been well documented; some analysts have claimed that the costs will be largely temporary, and the benefits enduring.

Yet, as Banjara and the quarry workers of Rajasthan illustrate, the disruptions might last longer than the accumulated savings of most workers in India’s vast informal sector. In Rajasthan, for instance, the production of sandstone has fallen by 20% for the state as a whole, and halved for Bijolia – one of the biggest sandstone producing regions of the state. As GST approaches its one-year mark, its effects continue to ripple through the farthest sections of the Indian economy.

The policy’s roll out has coincided with a discontinuity in the method of calculating jobs created by the Indian economy, making it difficult to assess the impact of India’s most significant policy changes — GST and Demonetisation — on the country’s most pressing concern: Jobs.

“A significant problem with evaluating the jobs and wage effects is that there has been no national level survey since demonetisation happened in November 2016,” said Amit Basole, a professor of economics at Azim Premji University.

This has left economists clutching at straws when it comes to explaining the true health of the Indian economy.

“Demonetisation and GST coerced some firms which had the capacity to turn formal to become so, through the use of bank accounts for payments, and this may show up in an increase in some formal employment, for instance in the payroll data of the Employee Provident Fund Organisation,” said Jayan Jose Thomas, who teaches economics at IIT-Delhi. “But what may also have happened is that following these policies, those firms in the informal sector that could not become formal may have died, affecting workers in already precarious jobs.”

Rajasthan’s sandstone industry offers a fascinating instance of how economic policy percolates through the many layers of India’s formal and informal economy.

Here in Bhilwara, teams of eight workers lift 60 to 70 kilo-slabs on their shoulders together to load one truck a day. The men bear scars on their shoulders from the relentless lifting. For this backbreaking work, they earn Rs 4,000, which they divided as Rs 500-400 each at the end of the workday, which came to twice the farm wage.

But the twin blows of demonetisation and GST had staggered the stone business.

“First, notebandi wiped out all work for us for three-four months. Then after GST, the cost of building material went up,” said Mohan Gujjar, who had accompanied Banjara from Mohbatpura village to look for work. “Small traders are still struggling. Nearly 75 percent of sandstone “stocks” [clearings where sandstone was manually processed by the workers using hammers and chisels] have shut down now.”

“Local purchasers and traders of sandstone stocks that operated only in cash were wiped out in the months after notebandi, they are still struggling.”

The closure of stocks had affected the small sandstone traders, which had rippled down to workers like him.

“When the small entrepreneur has no work, then who will employ daily wagers?” Gujjar asked.

Ranjit Banjara, who works as a local stone supplier, explained. “Earlier, anyone could source stone from the quarries. They would open a “stock” of sandstone, and hire 10 to 15 kaarigar(artisanal miners) and 10-12 hamaal(freight workers),” explained the young man.

“But local purchasers and traders of sandstone stocks that operated only in cash were wiped out in the months after notebandi, they are still struggling.”

Rajasthan contributes 10% of the world’s production of sandstone. Domestically, it is the largest sandstone-producing state by value, followed by Madhya Pradesh. Rajasthan accounts for 80% of India’s sandstone output. Bijolia is one of the largest centers of production and exports, along with Jodhpur and Bundi.

“Earlier, “waste” or discarded stone was used easily, now government has imposed royalty and GST on that as well,” he said. “This has made it too costly for smaller units processing and selling the stone to use in farm boundaries, or for building under government’s toilets and housing schemes.”

Workers say the dip in production has meant a dip in jobs, but economists are unable to muster the data to critique this claim.

Workers say the dip in production has meant a dip in jobs, but economists are unable to muster the data to critique this claim.

A nationally representative jobs survey is conducted every five years by the National Sample Survey (NSS) Office under the Ministry of Statistics and Programme Implementation. The most recent round was to take place in 2016-17, five years after the last such survey in 2011-12.

“But for some reason this survey did not take place. The most recent employment survey available from the Labour Bureau is from 2015-2016, and since then, even these surveys have been discontinued,” said Basole, the economist at Azim Premji University.

The five-year NSS survey has now been replaced by a more frequent, annual Period Labour Force Survey. The results of a round of survey done in April 2017 have still not been published. “In the absence of national-level data, experts are trying to get estimates of recent policies through field studies”, added Basole.

In Bhilwara, elderly and Adivasi workers said though living off small, arid farms, and subsistence wages is always hard, the past year they have witnessed things get worse.

Ram Lal Gujjar, an elderly hamaal worker who wore a blue turban that added height to his tall gaunt frame stated that when small traders have been struggling for the past few months, for daily wage workers, the disruptions and shrinking work have made it harder to even afford to eat dal or vegetables in their meals, and make ends meet.

Of thirty workers whom this reporter spoke to, nearly a fifth – more than 16 percent – said they had not had dal even once the previous week.

Murli Banjara, who had been quietly listening to the talk of clamour for work at Shakkargarh labour chowk, showed a green cheque handkerchief he held in his hands, containing the meal he had packed that morning – a lunch of plain, dry roti, and nothing else.