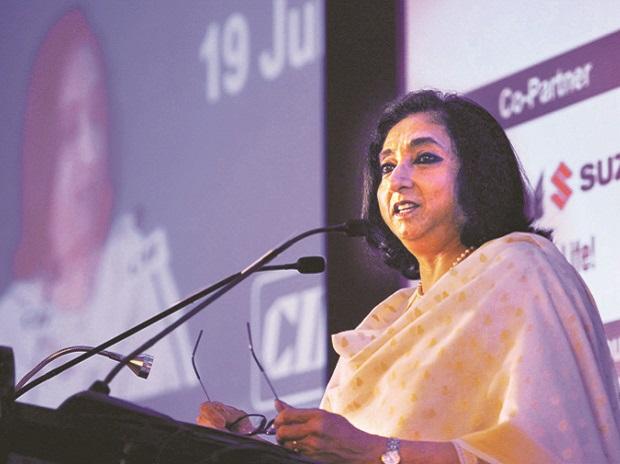 In the GST, there is scope for rationalising rates, but timing is very important in all this, whether you want to do it now or wait for another 3 months & see how revenue is doing,says Sarna

Against the backdrop of Finance Secretary Hasmukh Adhia writing to field officers of the Central Board of Indirect Taxes and Customs (CBIC) to shore up GST collection, the board Chairperson, Vanaja Sarna,defends the performance of her officers. Sarna tells Dilasha Seth and Indivjal Dhasmana she will revert to Adhia with data and figures. Edited excerpts:

Do you see GST collection going down? It was more than Rs1 trillion in April and Rs940 billion in May. Finance Secretary Hasmukh Adhia has written to field officers to shore up revenues.

It is not going down as you have seen the trend in the first few months. It was more than Rs 900 billion when we started. Then it went down to Rs830 billion and finally went up to Rs880-890 billion. But then, March is a peculiar month when one usually sees a spurt, so this year too we crossed the Rs1 trillion mark in April (for March). But if we look at revenue for the next month, you will see that we reached Rs 940 billion now. It is good growth. I feel we have done quite well and will be sharing those figures and data with the finance secretary to explain our position so far as revenue collections and registrations are concerned. The finance secretary is telling everyone that while you may be doing well and the GST is settling down, push for higher revenues.

Industry is lobbying to reduce rates. Will the GST Council take that up in the next meeting?

Many business entities have been seeking rate reduction. This has to be looked at very carefully as right now, we have reached a stage when the GST has stabilised. Before touching rates further, we need to reach a comfort zone as far as revenue is concerned. Eventually, it is the Council that will have to take a decision on any rate revision.

Finance Minister Arun Jaitley had said that the number of slabs would be converged. How soon do we see that happening?

These are matters to be taken up in the future. In the GST, there is scope for rationalising rates. But timing is very important in all this, whether you want to do it now or wait for another three months and see how revenue is doing. Revenue peaks in March every year, but Rs940 billion in May was good. We may like to wait for a month or two to decide on rate rationalisation.

Have you finalised the process of simplifying GST returns?

It has been taken up and presented before the Council. There is a group of ministers looking at it. Once the final touches are given, we will see how the returns will read. Naturally some time will be needed because the system has to be in place. We have to build the software. GSTN will need four-months months, if not more. The fact that there will be simplified returns is a good thing although trade has settled to GSTR 1 and 3B returns. So even if these continued for a few more months, it doesn’t matter as long as the trade is comfortable filing with ease. When we come up with the final return, it needs to be much simpler and easier. That is what is being attempted.

GSTN is being converted into a government body. How will the transition happen? Will it cripple the working of GSTN?

I don’t think so. GSTN is the custodian of a lot of data and the users are largely government departments. I don’t think there should be too much of an issue about the way it is going to function in the future. It has been running in a particular way and will continue to do so. The team will remain the same and the change, I am sure, will only be for the better.