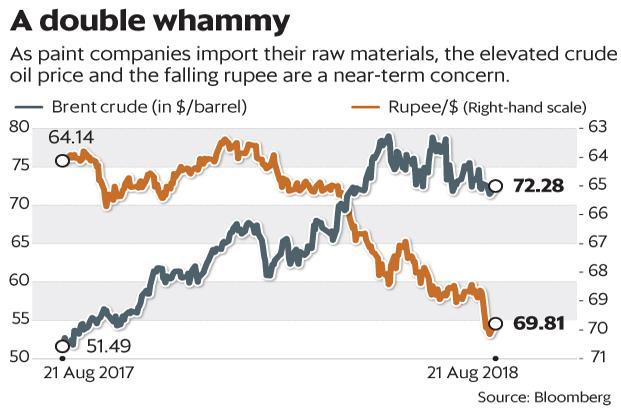 Had there been no GST rate cut, paint makers—including Asian Paints and Berger Paints—would have hiked prices again due to higher raw material costs

The rupee depreciation has impacted India’s paint makers, given that the raw materials are mostly imported. The surging cost of Brent crude has kept prices of crude oil-based derivatives, monomers and TiO2 (titanium dioxide) at higher levels for the past few quarters.

As a consequence, paint prices were raised by around 5% in fiscal year 2018. Prices were hiked by 2-3% in the June quarter as well. Increased prices, along with some cost-saving measures, aided operating margins of decorative paints market leader Asian Paints Ltd, and Berger Paints India Ltd in the three months ended June.

Subsequently in July, the goods and services tax (GST) on paints was reduced from 28% to 18%. Given the anti-profiteering clause under GST, paint makers passed on the full benefit to consumers by slashing prices.

Had it not been for the GST anti-profiteering clause, paint companies would have simply raised prices this time too, given that historically, the industry passes on the burden of increased costs to consumers to protect its margins.

According to the Asian Paints management, following the GST rate cut, it will be difficult to take fresh price hikes in the short term to avoid the anti-profiteering clause.

In a post-earnings conference call with analysts, the management said pressure on gross margins will increase in the coming quarters as firms will refrain from taking price hikes despite input cost inflation.

On the other hand, competitor Berger Paints India told analysts that considering the rising raw material costs and the rupee depreciation, it may take a price hike in ensuing quarters to maintain margins.

While it remains to be seen how paint companies tackle this, in case no price increase is undertaken, gross margins are estimated to get squeezed by 20-30 basis points in the September quarter, according to analysts. One basis point is one-hundredth of a percentage point. Further, increased pressure on margins will restrict overall earnings growth for paint makers in 2018-19 to some extent.