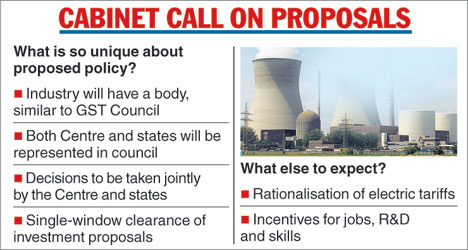 New Delhi: Ahead of a spate of state assembly polls this year and general elections next year, the Narendra Modi government intends to come up with a new industrial policy, which plans to set up an industrial decision making body with representations from the Centre and the states in a manner similar to the GST Council.

Top finance ministry officials said the draft policy on which work started at least three years back would be placed before the cabinet later this month.

The formation of a GST Council-like body – a single-window clearance body for large industrial proposals – would, however, require consultations with the states.

Such a body would also be expected to take quicker decisions on labour law changes, where both the states and the Centre have to agree.

Both must also agree on land use and leasing policies as well as on taxation issues.

The policy, India’s third since Independence, calls for incentives to create jobs, develop skills and R&D by companies as it promises to create millions of jobs and try to push the share of manufacturing in GDP to 25 per cent, up from the current 16.5 per cent.

As India gears up for some crucial state assembly polls later this year and the general elections next year, observers expect a series of announcements on the economy.

Officials said the policy will try to address the huge difference between power tariffs paid by industrial users – among the world’s highest – and retail consumers.

It will moot proposals for the direct transfer of benefits in case any state or the Centre wants to subsidise electricity.