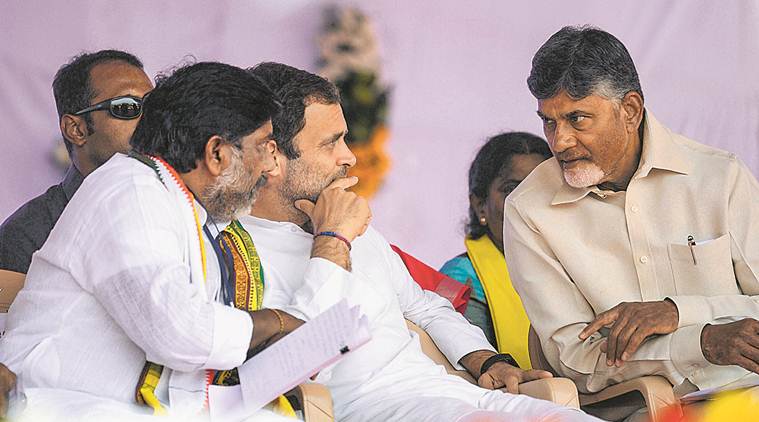 Naidu and Rahul attacked Prime Minister Narendra Modi, accusing him of causing immense hardship to people by bringing in demonetisation and GST. “Poor people have still not recovered from the note ban. GST has not been implemented properly, causing problems to small traders,’’ Naidu said at a meeting at Khammam. Rahul later left to address other public meetings but in the evening, he and Naidu got together and participated in meetings and roadshows at Sanathnagar in Hyderabad. The two leaders also attended a meeting at Ameerpet.

At Kosgi in Mahbubnagar, Rahul targeted Modi and Telangana Chief Minister and Telangana Rashtra Samithi (TRS) chief K Chandrashekar Rao. He said the ruling TRS is the “B-team of BJP and RSS”. “Have you ever heard KCR criticise the PM? When we were opposing the Land Acquisition Bill in Parliament, TRS helped the BJP. TRS has always helped the BJP. If TRS really intends to develop Telangana, it won’t tie up with BJP. TRS is Telangana Rashtriya Sangh Parivar. KCR has let the people of Telangana down. Only he and his family have benefited from his policies and schemes,” Rahul said, claiming that the state government’s schemes are actually policies of the previous Congress government that have been renamed. He further claimed that TRS has joined hands with AIMIM and both parties want to ensure that BJP wins the general election.

Reacting to Modi’s remark that TRS and Congress were two sides of the same coin, Rahul said, “Modi says Congress and TRS are alike now, but he never said it before the election campaign,’’ he said.

Rahul later addressed a meeting at Kodangal, the constituency from which state Congress working president A Revanth Reddy is contesting. “When Telangana was formed, it was a revenue surplus state with over Rs 17,000 crore surplus budget, but in the last four years, a debt burden of Rs 2 lakh crore has been accumulated by the TRS government,’’ he said.