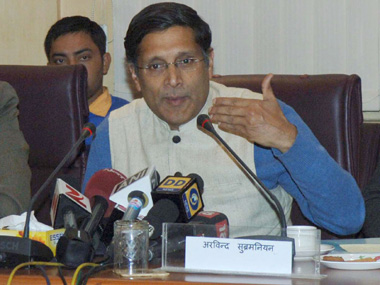 Hyderabad: Former chief economic adviser Arvind Subramanian said on Monday that the inclusion of petrol and diesel in the Goods and Services Tax (GST) ambit was not possible until the revenues under the new tax regime stabilises.

“You know it is desirable to have that (inclusion of petrol and diesel in GST). There is a good economic explanation or fiscal explanation for why it is not easy. Because if you put petroleum products in to GST, naturally you will have a loss of revenues,” Subramanian said at an interactive session at ‘Mathan’, a platform for thought leaders, here.

“Because it is (a) widely-used intermediate input. And, therefore, the thinking was that the GST revenues have to stabilise before that can be brought in, because you need to have enough other revenues to cushion for the loss of putting petroleum into the GST,” Subramanian said, while replying to a query on why petroleum products are not included in the GST.

Subramanian said though the country’s growth had slowed down in the recent years, India remains important in the international context. “India is still the place of dynamism in a sense that the most important hope is that our children’s lives will be better than us.”

The GST needs to be improved in terms of many things, so there are many many challenges ahead for the economy, Subramanian said.

According to him, standards of living of majority of Indians, including at the bottom, had improved much more rapidly during the past 25-30 years.

“That is why we see big reduction in the poverty, improvement in life expectancy. But it is true that disproportionately, the benefits of are concentrated at the top,” he said.

That is true, but that is a worldwide phenomena not only for India, he added.

Subramanian, however, declined to answer a query on the resignation of Urjit Patel as the Reserve Bank of India governor.